"Jeanie" at the Tramshed: mystery solved (more or less)!

Jeanie at the Tramshed: mystery solved!

In which an informant in possession of an accidentally recorded song helps The Wonderful and Frightening World of... Data crack a four-year old Fall mystery. Scroll down for the sound file!
On 3 February 2017, The Fall played the Tramshed in Cardiff.
There are positive reviews here and here (or here) and here, and the gig was discussed on The Fall Online Forum here.    A somewhat negative take is here.
No full audience recording of the gig has emerged.  Just four songs seem to exist on video (currently available on YouTube):
Dedication Not Medication (excerpt)
Fall Sound
Auto Chip 2014-2016
Mr. Pharmacist
The Fall Online Gigography reproduces a copy of the setlist (which of course the group would not necessarily have stuck to, and which omits Mr. Pharmacist): 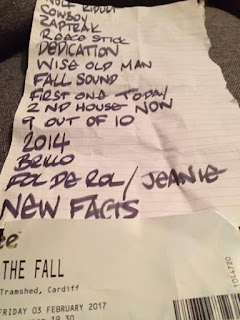 The appearance on the setlist of "Jeanie" has set Fall fandom ablaze with speculation, or at least mild curiosity.
In a thread about the song on The Fall Online Forum, it is noted that Fall fan Jessie Taylor had reported being told by drummer Keiron Melling that the song was a cover.   But a cover of what?
Was it The Sweet's "Jeanie" (1971)?
Was it Dean & Jean's 1964 single, "Hey Jean, Hey Dean"?
Was it the theme tune to "I Dream of Jeannie"?!
Was it David Bowie's "Jean Genie" (1973)?
Without audio evidence, or a more categorical statement by someone in or associated with the Group, or a report from someone who was there on the night with a good memory and an encyclopedic knowledge of rock and pop history, it was obviously impossible to answer the question.
Some have pointed to a detail in an instagram posting (dated 17 January 2019) by MES' partner Pamela Vander of various sheets of MES' notes.
Here's the detail - it's a list of apparent song titles, headed "Next LP".   Note that we do not know when the list was written.   Some of the titles seem to be working titles, or adaptations of existing songs.  Reece Stick was played live. Pamela has said that Grease was a cover version from the movie soundtrack.
But note in the top right, in red, what looks like "Jenny! Jenny" (or "Jeany Jeany!", and some people have suggested "Jeany! Deany!", see above). 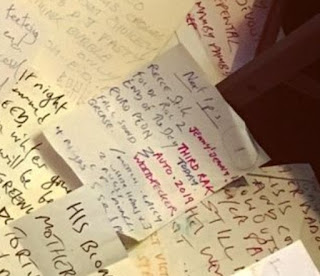 Link to Instagram
Some fans linked this to Jeanie, but the situation remained unclear.
The Cardiff gig appears to have been the first and only time the song was played, and it has not turned up on any official releases or bootlegs.  Until now.
Here, for the first time ever, is an audience recording of the song:
Many thanks to Rob, who sent me his accidental recording for identification.
The way MES sings is somewhat reminiscent of Race With the Devil, but it is difficult to make out much of the lyric.
However, from what I can hear it sounds like Eddie Cochran's Jeannie, Jeannie, Jeannie.
According to Wikipedia [Link] the song was written by George Motola and Ricky Page for The Georgettes (a group named after Motola which included his wife Page).   It was then called Johnny, Johnny, Johnny.  But The Georgettes never recorded it. The earliest female-perspective version I can find is by Kay Cee Jones (1958).  Cochran's version, with the amended title, was released in January 1958, one of the early songs that marked his transition away from teen pop.  The lyrics notably quote from other contemporary rock and roll songs in a way that MES has been known to do.
Jeannie, Jeannie, Jeannie reached #94 in the Billboard Charts, and posthumously reached #31 in the UK charts in 1961.
The spelling is Jeanie, Jeanie, Jeanie on some releases (see for example this discogs entry).
The song has been covered by a number of artists, including Jimmie Maddin (March 1958) Vince Taylor and His Playboys (titled Jenny, Jenny, Jenny. Recorded 1962, but apparently unreleased until 2000) and the Stray Cats (1981).  The Fall covered Vince Taylor'sBrand New Cadillac in the late 1970s.  Without further information we don't know for sure whether The Fall were intending to cover Cochran's version or someone else's.   The Fall's rendition does sound closest to Cochran to my ears, but your mileage may vary.
It's worth noting the existence of Little Richard's song Jenny, Jenny (1957, credited to Penniman - Little Richard himself - and Enotris Johnson, but some versions credit John Marascalco instead of Penniman alongside Johnson).  See Wikipedia.  This song has also been widely covered, for example by Carl Perkins, Jerry Lee Lewis, Gene Vincent, Fleetwood Mac and The Sonics (the Vince Taylor cover of Jeannie, Jeannie, Jeannie, retitled Jenny, Jenny, Jenny, was miscredited as the Little Richard song on this release).
(Interestingly, but not necessarily significantly, a 1981 Eddie Cochran/Gene Vincent compilation entitled "Eddie Cochran And Gene Vincent - Their Finest Years: 1958 And 1956" features both Jeannie, Jeannie, Jeannie and Race With The Devil: see discogs.)
Curiously, 3rd February, the date this song was performed, is "the day the music died".  2017 wasn't a particular anniversary, but 3rd February is the date of the 1959 plane crash which killed Buddy Holly, The Big Bopper (responsible for the original version of White Lightning), and Ritchie Valens .   I'm probably way off the mark, but maybe covering Eddie Cochran was some kind of knowingly ironic tribute.
Returning to Pamela Vander's instagram photograph above, there's an unresolved question about whether "Jenny! Jenny!" (if that's what it is) refers to Jeannie, Jeannie, Jeannie or Jenny, Jenny, Jenny, or to Little Richard's Jenny, Jenny.   Perhaps The Fall considered recording both!
Finally, by way of conclusion: as far as I can tell (and feel free to comment if you disagree), Jeannie, Jeannie, Jeannie is the mystery song, called "Jeanie" on the setlist, that The Fall played in Cardiff on 3rd February 2017.
(Hat-tip: Rob, who accidentally recorded the song from his trousers!)
Posted by dannyno at 20:18