This is something that comes up now and then.   Here's chapter and verse.
David Bowie, interviewed by Kurt Loder, Rolling Stone, April 1987 [link (login required)] / [link to archive.org]:

Does your son turn you on to groups?
Yeah. I got this band I've got to listen to, called the Stupids. I never heard of them. It's a band in England that Joe quite likes. He really liked PiL, until he saw them, which was unfortunate. I thought the last album was great, but we went to a bad show. The whole thing was so tired. There was no enthusiasm in the band or the audience. . . .
I don't like many of the English bands at the moment. And the older ones, who were exciting, like the Fall . . . I mean, that new album by the Fall is such rubbish, such fourth-form poetry. It's really sophomoric.

MUSICIAN: What have you been listening to recently?

BOWIE: Well! The band this week-I've only just discovered them, so they're my pet project- is the Screaming Blue Messiahs. They're the best band I've heard out of England in a long time. I tried the Jesus and Mary Chain but I just couldn't believe it [laughs]; it's awful! It was so sophomoric-like the Velvets without Lou. I just know that they're kids from Croydon [laughs]; I just can't buy it. I used to like the Fall, but now it's ending up like fourth-form poetry. I like the Beastie Boys single. They're like Gary Glitter meets the Coasters doing rap!

Bowie is presumably referring to Bend Sinister, released in September 1986.

Mark E. Smith waited a couple of years before he hit back.

Who are you most important personal critics?

The group basically. It's amusing. David Bowie had a go at me. I pissed meself. He said I write sixth form poetry. I couldn't believe it. And there he is now trying to do 'Kurious Oranj' with a white shirt and black trousers. He's a fucking old bastard and I hope you print that. He's redundant. He put British music back five years, him and his stupid imitators. He's third-rate and always has been. ha ha ha. 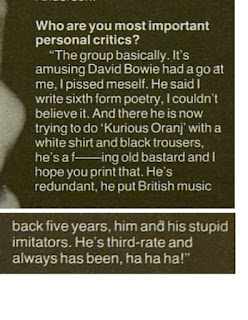 Bowie later namechecked The Fall in his liner notes for Buddha of Suburbia (1993):

A major chief obstacle to the evolution of music has been the almost redundant narrative form. To rely upon this old war-horse can only continue the spiral into the British constraint of insularity. Maybe we could finally relegate the straightforward narrative to the past.

On the other hand, modern circumstances having had a dysfunctioning capacity upon pure chronological perspective, my writing has often relied too arbitrarily on violence and chaos as a soft option to acknowledging spiritual and emotional starvation. I know I'm not alone with his dilemma.

On yet another hand, chaos itself has been expressed intelligently, contextually, virulently and in vital ways by Pixies, Sonic Youth, The Fall, Glen Branca, Television, Suicide, to name but a few. Now this chaos, chthonic and Apollonian mush, harnessed and ordered, can work for us. It could be reordered within a formal harmony to recreate focus and, to some degree, rebalance the often loutish nadir into which we have blundered.

Our prodigious British talent is more than able to reveal the real gems submerged under this swaggering, violent and ignorant millennium.

MES chose a Bowie song for the "Songs in the Key of Life" feature in New Musical Express, 1 May 1999. He may be being a tiny bit sarcastic:

SONG YOU FELL IN LOVE TO

"With my mother's cooking? I don't know. Oh, with a girl. Probably 'Station To Station' by Dave Bowie. (Dissolves into fits of laughter) I always loved Dave Bowie. I think people underestimate Dave Bowie's influence on the British music scene. What would we have done without Dave Bowie? I remember going from station to station and missing a train at one point and it sums it all up for me. I met a girl at the train station and it brings it all back. I'm lying."

Finally, Mark E. Smith on Bowie, in his autobiography, Renegade (2008):

They were a horrible, conceited bunch, that 70s lot – Elton John, Clapton and Bowie. It’s indicative of the age we’re living in that they’re still revered the way they are, when our recent Prime Minister wishes he was one of them...