Must We Fling These Facts...?

This isn’t really a Fall data thing, but it’s a question that came up on the Fall Online Forum, and I think the answer deserves a wider audience.

However, it is attributed to various sources and inconsistently dated.  In fact, I have hitherto been unable to find an accurate citation anywhere.

Cliff Richard, Bill Grundy, the NME and the Sex Pistols are often mentioned, as are various tabloid newspapers. Later in this piece I will discuss some of these mistakes.

For some time I accepted the information provided in Pat Long’s history of the NME as the best available (Long confidently states that the headline appeared in the People in 1973), but a desire to track down the original headline and definitively establish the place and date of publication drove me to continue researching, and a few days ago I succeeded in locating the article (using the British Newspaper Archive database).  As far as I can tell I am the first person to do so since it first appeared. 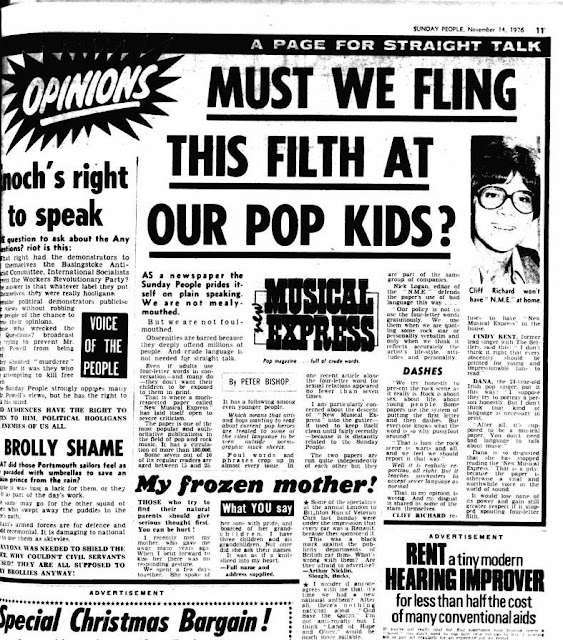 The headline is over an article by columnist Peter Bishop, complaining about ‘bad language’ in the New Musical Express.   According to Bishop,

As a newspaper the Sunday People prides itself on plain speaking. We are not mealy-mouthed.

But we are not foul-mouthed.

Obscenities are barred because they deeply offend millions of people. And crude language is not needed for straight talk.

Which is why Bishop objects to the language used by the NME, especially since it is read by children.


That is where a much-respected paper called "New Musical Express" has laid itself open to severe criticism.

The paper is one of our most popular and authoritative publications in the field of pop and rock music. It has a circulation of more than 180,000.

Some seven out of ten of its regular readers are aged between 15 and 25. It has a following among even younger people.

Which means that girls and boys wanting to read about current pop heroes are treated to some of the vilest language to be seen outside pornographic muck sheets.

Apparently, "in one recent article alone the four-letter word for sexual relations appeared no fewer than seven times."

Bishop was also uncomfortable that NME and the Sunday People shared a publisher (IPC):


I am particularly concerned about the descent of the "New Musical Express" into the gutter - it used to keep itself clean until fairly recently - because it is distantly related to the Sunday People.

The two papers are run quite independently of each other but they are part of the same group of newspapers.

Nick Logan, who was the editor of the NME at the time, is quoted defending the 'paper's policy:


Our policy is not to use the four-letter words gratuitously.  We use them when we are quoting some rock star or personality verbatim and only when we think it reflects accurately the artist's life-style, attitudes, and personality.

We try honestly to present the rock scene as it really is.  Rock is about sex, about life, about young people. Some papers use the system of putting the first letter and then dashes. But everyone knows what the word is so why pussyfoot around?

That is how the rock scene is, warts and all, and we feel we should report it that way.

Peter Bishop, however, was not impressed.


Well, it is realistic reporting, all right. But it teaches youngsters to accept sewer language as normal.

That, in my opinion, is wrong. And my disgust is shared by some of the stars themselves.

The disgusted stars turn out to be Dana, Cindy Kent ("former lead singer with The Settlers") and Cliff Richard.  Since Cliff Richard is often mentioned in connection with the headline, here's his bit:


CLIFF RICHARD refuses to have "New Musical Express" in the house.

So there we go.  The newspaper was the Sunday People, the year was 1976, and the occasion was a general complaint about the use of four-letter words in a popular pop/rock magazine read by young people. Cliff Richard is sort-of quoted.

A good many writers have quoted the headline, but all of the references I've found have got one or more of the key facts wrong.

In the 1970s, the Sex Pistols were banned from gigging by local councils and their phenomenon generated the tabloid headline “Must We Fling This Filth at Our Pop Kids?” (Huq 2017)

But the Sunday People article does not name the Sex Pistols, and does not mention punk or banned gigs. Note that Huq does provide a citation for this information - to "Bevan".


Suddenly, in the Silver Jubilee year of 1977, McLaren had given them a way to become anarchists, revolutionaries, rebels on a street corner with a very different God Save The Queen as their very own national anthem.

Must we fling this filth at our pop kids?” screamed the Daily Mirror headline, while the band’s gig at the Castle Cinema in Caerphilly brought the controversy even closer to home. (Bevan 2010).

But it obviously wasn't a Daily Mirror headline, and it wasn't about the Sex Pistols or their Jubilee year antics.  Bevan's chronology is also confusing, since the Sex Pistols' gig at the Castle Cinema in Caerphilly took place on 14 December 1976.   Both that gig and the Silver Jubilee post-date the Sunday People headline.

Hysterical headlines in the News of the World and The Sun were aimed one week at the Sex Pistols: "Must We Fling This Filth at Our Pop Kids?" and next week at the Provisional IRA... (Stephens 2001)

Peter Doggett absurdly manages to attribute the headline to outrage over Cliff Richard's sexy image (thereby misdating it by about twenty years):

[Jack] Good stripped away Cliff’s Elvis-like sideburns and guitar, and encouraged him to writhe and smoulder (provoking one the great British headlines of all time: “Must we fling this filth at our pop kids?”). (Doggett 2015)

Pat Long (who sadly died in August 2018 [link to NME obituary]) was a former NME journalist and Live Editor who wrote an excellent history of the NME. Here is the relevant bit:

An outraged article in the Sunday People decrying the kind of material the NME was printing appeared in 1973 following the declaration by Cliff Richard that he refused to ‘ have the paper in his house. The People’s article appeared under the deathless headline ‘Must we fling this filth at our pop kids?’  To the staff of the NME, the answer was an unequivocal ‘yes’.

As we've seen, Cliff Richard was not actually quoted in the People article; instead his opinion was summarised.  Nor was the article based around his opinion.  And the year was not 1973.

Ian Macleay (2010) is not alone in wrongly dating the headline to the fuss over Bill Grundy's drunken TV interview with the Sex Pistols on 1 December 1976 (Link).  Of course, the headline preceded that incident.   And 1 December that year was a Wednesday, and the People a Sunday newspaper.


Nobody was really prepared for the media reaction the next day. That's where The Filth and the Fury movie came from: some of the tabloid headlines were classics.

'Must We Fling This Filth At Our Pop Kids?'

'I Kicked In My TV Set Says Angry Father Of Four.'


I see the Grundy thing as being absolutely key in the whole way of the thing.

'I Kicked in My TV Set, Says Angry Father Of Four', and 'Must We Fling This Filth at Our Pop Kids?'  The filth and the fury. Yes, I'm sure it was absolutely crucial. If it hadn't happened I think it might have just withered away.  It's too hypothetical.

“Smells Like Focus Group Spirit? The Changing Nature of Pop Fandom and its Deployment as a Political Tool." Popular Music and Society, Vol. 38 (1), pp.95-99 [online]. Quote from p.